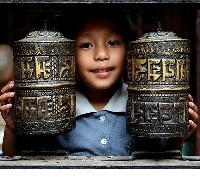 For centuries, prayer as a way of healing used in many cultures around the world. We have seen and heard many examples of how prayer makes countless miracles in my life. In Tibetan Buddhism, a prayer wheel is a form of verbal prayer. This is a fascinating religious tool that uses the power of unspoken words.

In Tibetan Buddhism, the mantra (prayer) is not necessarily to say that they helped. The mantras carved on the stones and left in a pile near the road where travellers can see them, and the mantra you just need to consider in order to be useful. 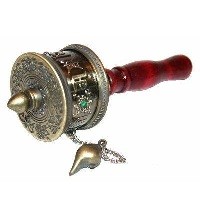 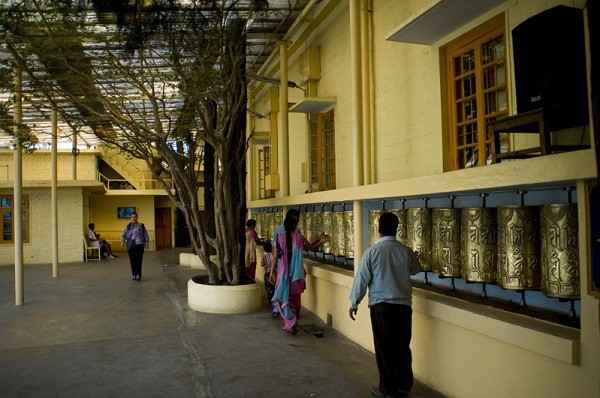 Some prayer wheels are powered by electric motors.

Drum prayer has a special significance for Tibetans. It is a means for spreading spiritual blessings, prosperity and removal of negative energy.

Typically, each prayer wheel contains a roll of thin paper with the mantra, placed on the axis inside the drum, usually with the mantra "Om Mani Padme Hum" (the letters below show this famous mantra in Tibetan), so it is also called Mani the drum. Mantra on the coil printed many times (the more copies of the mantra, the greater the benefit), and the syllables of the mantra carved on the outside of the container drum.

Tibetan Buddhists believe that reciting this mantra, out loud or silently, invokes the powerful benevolent attention and blessings of Avalokiteshvara (TIB. Chenrezig; calm. Ariabala; Bur. Area-BA'al) is the embodiment of infinite compassion.

Tibetan Buddhist Mani drum always rotate clockwise when viewed from above, for several reasons: it follows the direction of the Sun; it rotates the syllables of the mantra so that they will be held in order as if read; and it corresponds to the time bypass the stupa (religious structure).

According to the Tibetan Buddhist tradition, prayer against the drum is rotating such a drum has the same effect as a good oral reading of the prayer.

A large part of Tibetan culture currently forced to seek refuge outside of their homeland. In Tibet under Chinese rule, mechanical reels everywhere, on trucks and buses, cars and tanks, but spiritual training and practice, and even teaching in the Tibetan language, are severely restricted. 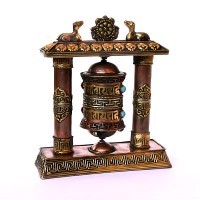 disease, your negative thoughts and any bad imprints left on your mental plane.

Second, you visualize, the rays emanating from the mantras. They are like a vacuum sucking the dust, sucked all the diseases and all harmful spirits and, most importantly, the causes of disease and negative karma. All of this is absorbed or absorbed into the prayer wheel, thereby purifying you. You can imagine all this black cloud, which then collapses in the drum.

Prayer wheel is an excellent tool for meditation, visualization, calming and centering. It really is an amazing innovation from the world of Tibetan Buddhism.